There can be no clearer demonstration of how digital trade documents such as bills of lading reduce costs and hugely increase the efficiency of world trade.

Research conducted by Bolero analysing its own data that goes back to when Bolero issued its first eBL in 2002 has revealed that electronic bills of lading (eBLs) take less than a tenth of the time it takes to process their traditional paper equivalents. The analysis found that an average transaction using an eBL was completed within 2.6 days compared with the 30 days it takes using paper according to BIMCO, the world’s largest shipping association. The measurement starts from when the carrier creates the bill to the point at which it is ready to be surrendered so the consignee can collect their cargo. 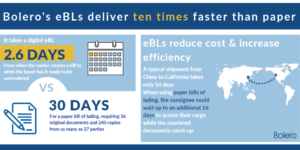 Successfully processing such a critical document as a bill of lading in less than three days eliminates the costly delays that paper generates. Demurrage and detention penalties and fees for letters of indemnity stack up rapidly when a buyer cannot collect its shipment. On some estimates, paper documents account for 15 per cent of the cost of transport.

Consider how common it is in the carrier trade for cargoes to sit in port waiting for the paperwork to catch up. A typical ore consignment, for example, takes only 19 days to travel from Freemantle in Australia to Mundra in India, while a cargo of finished goods exported from China to Long Beach in California requires just 14 days at sea.

It means there are many occasions when the length of time it takes for the consignee to get hold of their cargo is almost doubled because paper documents are still being couriered around the globe, have gone missing or requiring a complex web of checks and physical exchanges across continents to sort out a discrepancy.

Digitisation of the bill of lading on an established platform eliminates almost all these problems through its speed of execution, high level of security, full audit trail and legal validity. This makes forgery extremely difficult. No party can amend the document without being seen to do so and each document is protected by a digital signature and encryption.

Most importantly the holder is the only party permitted to demand delivery of the cargo from the carrier, reducing opportunities for confusion and delay while investigations or checks are completed.

The focus on the bill of lading is entirely justified because it is such a pivotal document across the whole supply chain. The eBL does all that is paper predecessor does, but without the huge drawbacks in terms of time to process and lack of security.

As their advantages have become apparent, eBLs have been recognised around the globe. BIMCO has issued a standard charterparty clause, while P&I clubs in the International Group provide as standard, protection and indemnity coverage for eBLs on the same basis as paper bills.

More are making the switch, but on a firm basis

The efficiency and security benefits of switching to eBLs are now so clearcut it is not surprising that more and more authorities, corporates, carriers, banks and importers are moving to a digital solution. It is important to note however that digitisation needs to proceed from a firm foundation on platforms that already shown themselves to be effective and have significant players as users. Otherwise, any digital trade document solution is likely to risk major pitfalls in the demanding day-to-day needs of the supply chain. For the same reason, we also need greater worldwide consensus on standards for documents and systems.

But that should not hold us back. When the benefits are so significant, everyone involved in world trade and its financing needs to become an enthusiast for eBLs and related digital trade documents. Reducing processing from 30 days to less than three is too big a gain to ignore.